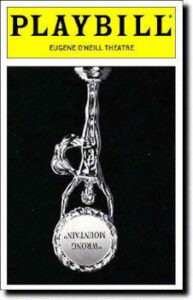 If you love the theater and are given to pondering (or bemoaning) its status as an art form in this age of mega-musicals for mini-minds, then rush to the Eugene O’Neill Theatre to see David Hirson‘s Wrong Mountain before the critics run it out of town.

Hirson’s first play, La Bete (written in Alexandrine couplets, no less!), had its ardent admirers but it suffered a critical drubbing when it reached the Great White Way. Hirson had a Pyrrhic victory of sorts when the play went on to win London’s Olivier Award as best comedy. Some eight years later, he’s back on Broadway and it’s tempting to see Wrong Mountain as a playwright’s revenge — a temptation to which, I fear, many critics will succumb, thus hastening this worthy play’s departure from the boards

Wrong Mountain is, in fact, a delightfully bilious play of ideas about art, intellectual snobbery, the meaning of success, and the ability of theater to transform the lives of those on both sides of the curtain. It is also, not incidentally, very, very funny.

Henry Dennett (Ron Rifkin) is a fiercely intellectual poet who has steadily produced a volume of poetry each year of his long career, which is to say he is totally unknown and in dire financial straits. Adding insult to injury, his ex-wife occupies his ancestral home with her live-in boyfriend, Guy Halperin (Michael Winters), an obscenely successful Broadway playwright.

At a Christmas dinner that makes George and Martha’s little set-to look like a Victorian tea party, Dennett lets fly his considerable fury and scorn on the hapless playwright. The theater, he rails, is an elaborate con game in which middle class philistines are made to feel intellectually superior while their complacent minds are protected from anything so distressing as real thought. Anyone, fumes Dennett, could write the “crap” that Halperin turns out. Halperin responds gallantly with a wager: If the poet can write a play and have it produced within six months, the playwright will give him $100,000.

Wrong Mountain goes on to chronicle Dennett’s efforts to write a meretricious piece of tripe and get it produced at a regional theater festival. Not only does he succeed but he undergoes a remarkable transformation. Along the way, Hirson has great fun with theatrical pretense, writerly egos, and, ultimately, the redemptive power of the theater.

The danger in any play of ideas is that the characters become mere mouthpieces for the playwright’s point of view. But like Shaw, another master of the comedy of ideas, Hirson creates articulate characters and then allows them to persuasively argue several sides of the issue. In one of the play’s neatest tricks, he manages to have Dennett take both the pro and con sides of the debate before the evening is through. This is one of those rare plays that can keep you and your theater-going companions parsing, dissecting, and analyzing deep into the night and on into the following days.

Alas, Wrong Mountain is not getting the definitive production it deserves. Director Richard Jones almost seems not to trust the material and directs much of it at a breakneck pace that quickly outstrips Rifkin’s vocal technique. Indeed, Rifkin seems to skate over the surface of his character much of the time and he fails to make the most of the poet’s possibly miraculous transformation.

On the other hand, Daniel Davis (the acerbic butler of The Nanny) is an unalloyed delight as Maurice Montesor, the sugar-cured Shakespearean ham who is the artistic director of the theater festival that breathes life into Dennett’s play. It is a tribute to his art that, in a role packed with funny lines, his biggest laugh comes on a wordless reaction to an occasional poem recited by the poet. Davis’ performance alone is worth the price of admission.

Others in the cast score as well, especially Daniel Jenkins as an idealistic young playwright who is every inch Dennett’s intellectual equal, Michael Winters as the beleaguered Broadway playwright, and Tom Riis Farrell as Dennett’s compulsively joking physician.

The physical production struggles to fill a Broadway stage with what was obviously a bargain basement budget. One can only assume that to bring a play this risky to Broadway at all the producers were forced to cut every conceivable corner.

Still, the play’s the thing here and the producers are to be commended for flying in the face of conventional wisdom and giving us the opportunity to savor this challenging and toothsome theatrical treat. Seize the opportunity. I fear it won’t last long.