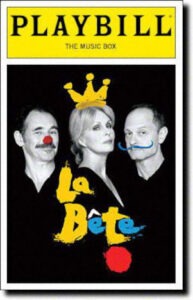 Voters for the Tony Awards have a major problem on their hands. Can they give Mark Rylance the Best Actor award again, a mere three years after Boeing, Boeing? Certainly they will be unable to avoid nominating him for his astounding comic performance in David Hirson’s masterful La Bête.

La Bête (The Beast or The Fool), first produced on Broadway in 1991 to little acclaim although it went on to win an Olivier Award in London, is something of a tour de force.

Written in rhyming couplets in the manner of Moliere, set in Moliere’s France, and dealing with the sort of cultural hypocrisies that were Moliere’s bread and butter, La Bete seems uncannily of the moment nearly twenty years on, with much to tell us about the current debased state of our entertainment culture. (Are you reading this Snooki?) Perhaps that is the definition of great dramatic art.

Hirson’s theme is the clash between high and low art. Valere, a street performer of decidedly low brow fare, is being foisted upon the elite actor-playwright-artistic-director Elomire (an anagram of Moliere, by the way) by the Princess, who provides 100% of the funding for Elomire’s troupe of thespians.

Valere, the Princess has decreed, is the breath of fresh air needed to take Elomire’s art to the next level. Elomire wants none of it.

The epic battle between and amongst these points of view is the rapid fire traffic of this intermissionless farce of ideas and what a ride it is.

This production of La Bete reverses the trajectory of the original – it started in London and comes to Broadway with an all-star international cast and a director with a string of recent blockbuster hits to his credit. It proves to be a winning combination.

Best of all is Shakespearean veteran Mark Rylance, former artistic director of London’s Globe Theater, as the spectacularly loathsome, crude, and coarse Valere. The twenty-minute monologue that comprises his entrance is the sort of thing theater legends are built on and Rylance rises to and well beyond the occasion. It is the very definition of “a tough act to follow.”

And yet David Hyde Pierce (Frasier) as Elomire and Stephen Ouimette (Slings and Arrows) as his right hand man Bejart manage to do just that. Theirs is the unenviable task to react to Rylance’s cascade of comic brilliance and they turn the exercise into something of a textbook illustration of the actor’s art.

The Princess’s entrance is marked by an explosion of gold glitter and Joanna Lumley (Absolutely Fabulous) lives up to the metaphor with a performance that makes the absolute corruption of absolute power absolutely palpable.

The director Matthew Warchus also helmed Boeing, Boeing, which I found hideously overwrought. But he brings just the right touch to La Bête, as he did for God of Carnage a few seasons back.

And kudos to the producers for lavishing money on what is, by any Broadway definition, a risky venture. Mark Thompson’s spectacular set and costumes add immeasurably to the fun of the experience.

La Bête, truth be told, is not an entirely successful piece. Valere is asked to present one of his plays and Hirson doesn’t quite manage to pull it off. But Elomire’s inability to cut his conscience to fit this year’s fashion has deep resonance today and Hirson, whose sympathies seem to lie on the high culture side of the great divide, wisely refuses to dismiss Valere out of hand, suggesting that highbrow culture is often its own worst enemy.

Anyone who loves the theater and relishes language for its own sake should rush to The Music Box Theater and catch this production. I loved Hirson’s last Broadway outing, Wrong Mountain, which touched on similar themes. It garnered dismissive reviews and closed quickly.

La Bete, thanks largely to the contributions of Rylance, Hyde Pierce, and Warchus, seems to have found favor with the critics. But the Broadway audience is fickle and, as Hirson himself pointed out in Wrong Mountain, not prone to revel in ideas when presented on the stage, not matter how brilliant the presentation.