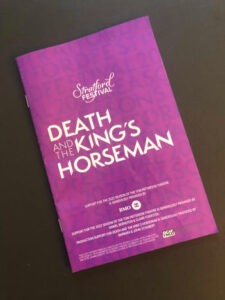 Death and the King’s Horseman at Stratford

Wole Soyinka’s poetic and elegiac play, Death and the King’s Horseman, widely considered the masterpiece of this Nigerian Nobel Laureate in Literature, packs quite an emotional wallop.

Director Tawiah M’Carthy mounted this play just two years ago at Soulpepper in Toronto with a much smaller cast. Thanks to the Stratford Festival, he’s getting a second shot at it with more resources.

His large cast (25 by my count) fills the stage of the Tom Patterson to overflowing as it recreates both the throbbing pulse of the colorful marketplace in the Yoruban town of Oyo and the opulence of a costume ball thrown by Nigeria’s colonial overlords to celebrate the visit of some lesser Prince of the British royal family. It amounts to quite an eyeful. Set designer Rachel Forbes (who created the witty costumes for this season’s The Doctor’s Dilemma over at the Shaw Festival) and costume designer Sarah Uwadiae deserve a good deal of the credit here.

The play takes place in the waning months of the Second World War. The Yoruban king has died and custom demands that Elesin (a leonine Anthony Santiago), the king’s horseman of the title, commit ritual suicide to accompany the monarch in the afterlife, thereby ensuring the continuity of Yoruban society.

For the remainder of his life, Elesin is a figure of great respect and high privilege, his praises sung by the aptly named Praise Singer (the hyper-kinetic Amaka Umeh). He exercises this privilege by deciding to take as a new bride a comely young woman, the daughter-in-law to be of Iyaloja, the “Mother of the Market” (a powerful Akosua Amo-Adem), who is none too pleased; one confronting eternity should not be so consumed with earthly desire.

When news of the impending suicide, somewhat belatedly it would seem, reaches the ears of the British, who don’t mind killing those they have conquered when it suits them, they are shocked — shocked! — that the Africans under their control would do anything so barbaric.

This puts the District Officer Simon Pilkings (Graham Abbey) and his wife Jane (Maev Beatty), distracted by their preparations for the costume ball, in a bit of a bind. In their profound ignorance of and disregard for the Yoruba and their culture, they are dressed for the ball in costumes that desecrate sacred Yoruban symbols. Not only are their “civilized” sensibilities offended by the impending suicide but Pilkings fears it could mar the royal visit. And so Elesin, who seems to be in a trance and well on his way to the next world is “saved” and imprisoned. Christopher Dennis’ lighting design is especially effective during this sequence.

Meanwhile, Elesin’s eldest son, Olunde (an impressive Kwaku Adu-Poku) has returned home from England, fully acculturated after his medical studies, to honour his father as the elder fulfills his sacred duty. When he sees Jane in her sacrilegious costume, he is appalled. “You have no respect for what you do not understand,” he says acidly.

The women of the market, outraged that a ritual so central to their culture has been thwarted, threaten to riot. When Pilkings tells them that he will not hesitate to order the soldiers to open fire on the crowd, Iyaloja replies in one of the play’s more telling remarks, “To prevent one death you will actually make other deaths?”

The British are not the only ones who have earned Iyaloja’s ire. She is also furious with Elesin, who emerges as a tragic figure. Like the protagonists of ancient Greek tragedies, he pays a heavy price for his flaws, losing his honour, his self-respect, and the respect of his community.

I must confess that I have been able to write this summary of Death and the Kings Horseman largely thanks to perusing the programme notes and reading the script after seeing the show. My appreciation of the play in performance was blunted by my inability to understand the accents of many of the Yoruban characters. (Wolé Oguntokun is credited as “Yoruba Dialect Coach.”) My companion, who had read the script beforehand, said she could understand about eighty percent of what was being said; I estimated my comprehension at ten percent. The problem was exacerbated by the constant (and quite evocative) drumming in the first scene that, even when reduced to a minimal level, competed with the spoken word. Others in the audience didn’t seem to have the same difficulty and that may be true for you as well. I certainly hope so because in every other respect the production is exemplary.

Soyinka has famously insisted that the concerns of Death and the King’s Horseman are metaphysical and that the play should not be seen as a “clash of civilizations.” I take him at his word. However, it’s extremely difficult not to see it that way when you entrust the play to a director, actors, and a diverse audience, every one of whom brings their own individual culture to the theatre. In my experience of the clash in the play, the audience, myself included, sided with the Yoruba. The British, who have made something of an art of not respecting what they don’t understand, suffered in comparison. I find it hard to believe that Soyinka doesn’t feel the same way.