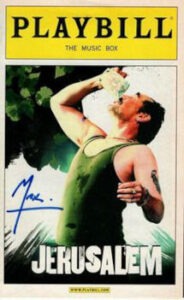 Jerusalem, Jez Butterworth’s ambitious and hallucinatory new play at the Music Box, may seem an odd choice for a major New York production. The play is, after all, irremediably English and not in the comfortably familiar Upstairs Downstairs sense of the term.

Butterworth’s bestiary of rural louts and loonies with their sometimes impenetrable Wiltshire accents (the play has reportedly been “revised” to make it more accessible to us Yanks) are types seldom seen on these shores. The play seems to reflect an anomie that has been percolating in Britain for the last twenty or thirty years and of which most Americans are blissfully ignorant. (If nothing else this production will serve to remind many Americans of how well our media protects us from any real familiarity with what’s happening in the zeitgeist of other countries.) Then there are the frequent references to timeless British pastoral traditions steeped in half forgotten folklore, fairies, Druid giants, Stonehenge, ley lines, and ancient gods (Yggdrasil anyone?). In short, hardly a recipe for middlebrow Broadway success.

The main reason I suspect that New York is being treated to such a challenging work is simple: Mark Rylance. And God bless him for it.

Here Rylance embodies Johnny “Rooster” Byron, a charismatic wild man of enormous appetites, a former daredevil in decline who lives in a squalid trailer in one of England’s vanishing forests dealing drugs and dreamscapes to a rag tag bunch of lost young souls who alternately adore him and piss all over him (quite literally although, thankfully, not on stage).

The play takes place over a 24-hour period during a festival honoring St. George, England’s patron saint, with Rooster facing imminent eviction from his demesne to make way for a new housing estate. Along the way, revelries are held, maidens ravished, tall tales told, home truths spoken, vengeance taken, until finally Rooster comes to terms with his inevitable obsolescence in a blaze of glory.

The play takes its title from a poem by William Blake, himself something of a wild man, that contains the lines

And was Jerusalem builded here
Among these dark Satanic Mills?

I will not cease from mental fight,
Nor shall my sword sleep in my hand,
Till we have built Jerusalem
In England’s green and pleasant land.

So Butterworth’s metaphorical (or is it allegorical?) intent is clear and I suspect audiences will have great fun trying to unravel the many threads that he has woven through this prolonged roar of a play. I’m certainly not going to embarrass myself by attempting an exegesis although I have a feeling that trying to find one-to-one correspondences in Butterworth’s swirl of allusions is a fool’s errand. I also suspect that the play is so specific to time and place that it has far more resonance for Brits than Americans.

But not to worry. If we Americans can’t fully appreciate this play, we still have Mark Rylance to watch and wonder at.

Rylance is an actor of astonishing idiosyncrasy, as anyone who saw him in Boeing, Boeing, or La Bete, or as Richard II at the Globe will readily appreciate. Rylance’s hallmark is making choices no other actor would dream of and, improbably, making them work beautifully. Ironically his larger than life Rooster Byron is his most straightforward interpretation in years. Mark Rylance quite simply is Rooster Byron. His embodiment is so complete that it leaves no room for reinterpretation. It is hard to imagine the play being mounted without him. Poor Jez Butterworth.

Rylance is ably abetted by director Ian Rickson, who also scored on Broadway with his pitch perfect production of The Weir. He has marshaled an excellent cast in which American actors blend seamlessly with their British colleagues to create, in the uni-monikered Ultz’s verdant set, a moonlit woodland revel such as Shakespeare himself might have conceived if he had access to some really good acid.