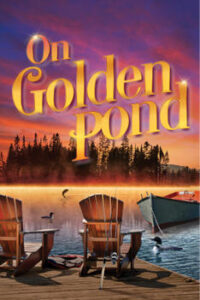 On Golden Pond At Drayton

If Marti Maraden is directing a play and there’s any way I can get to it, I’ll be there. That, and the lure of the redoubtable Benedict Campbell in the lead role, is what took me to Drayton Entertainment’s Hamilton Family Theatre in Cambridge to see Ernest Thompson’s 1979 play On Golden Pond.

Maraden and Campbell seemed like a winning combination. They certainly were with Twelve Angry Men and A Few Good Men, both produced by Drayton in earlier seasons. So why was On Golden Pond a bit of a let down?

On Golden Pond has become something of a theatrical war horse, the kind of guaranteed audience pleaser that is trotted out again and again, especially when two “stars” of a certain age are available for the leads. It is awash in the sort of genteel sentimentality leavened with a bit of sitcom humour that has become somewhat out of fashion lately, but which still has its ardent adherents. I will confess that I am amenable to having a tear or two jerked from time to time, so no complaints there.

Over the course of its five scenes, Thompson’s play tells the episodic story of one summer at the modestly comfortable vacation home of Norman and Ethel Thayer (Benedict Campbell and Janet-Laine Green) on Golden Pond. Well, not ON Golden Pond of course, but on the shore of a Maine lake of that name, which gives the play its title.

The Thayers are getting on in years and Norman, a retired professor of English, who is about to celebrate his 80th birthday, has begun to display signs of memory loss. The local, not too bright, postman Charlie Martin (Justin Bott) still carries a torch for the Thayers’ divorced daughter Chelsea (Stacy Smith), who appears in Scene Three with her new flame, dentist Bill Ray (Cyrus Lane) and his 13-year-old son Billy Jr. (Evan Kearns) who has a bit of a mouth on him.

The drama of On Golden Pond, such as it is, revolves around Chelsea’s strained relationship with her parents, especially her father, and Norman’s ways of raging against the dying of the light. Billy Jr. stays with Norman and Ethel while Chelsea and Bill jet off to Europe and, not so incidentally, get married.

The trick of staging On Golden Pond has always been to make Norman — who, let’s face it, can be a colossal horse’s ass — sympathetic to the audience. Thompson obviously got the memo. In adapting the play for the silver screen he smoothed some of Norman’s rough edges, made him more vulnerable, deepened the romantic link with Ethel, and helped Henry Fonda to an Academy Award for the 1981 film version.

Maraden and Campbell were stuck with the original On Golden Pond script. We do see the positive effects on Norman of spending a month with the son he wished he’d had and never got, but for me the central problem remains. That did not prevent the crowd of fellow oldsters with whom I saw the play from enjoying it thoroughly, right down to the now clichéd standing ovation.

But if Campbell cannot escape the specter of Fonda, Janet-Laine Green hits all the right notes as his devoted and long-suffering wife. Nice work, too, comes from the lovely Stacy Smith as Chelsea and Justin Bott as Charlie the postman.

Set designer Allan Wilbee has created a lovely Maine hideaway on Golden Pond and Kevin Fraser’s lighting beautifully captures the changing moods of the sun on a backwoods lake. The sound design is uncredited, but it creates the effects of motor boats on the lake and cars arriving outside with admirable subtlety. Jennifer Wonnacott’s costumes are generally effective and of the period, but I feel compelled to take her to task for giving Chelsea such unflattering pants in the final scene.

On Golden Pond has become traditional, almost stereotypical, light summer stock fare. If you approach it in that spirit, this production will not disappoint. I was hoping for a bit more from Campbell and Maraden.

On Golden Pond plays through August 6, 2022, in Cambridge and then transfers to the King’s Wharf Theatre in Penetanguishene, Ontario, where it will run from August 11 to August 28, 2022