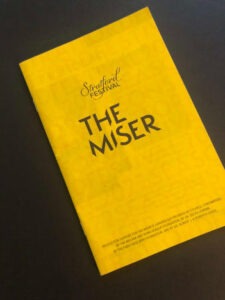 The Miser at the Stratford Festival

Intermittent hilarity and a bravura central performance manage to salvage the Stratford Festival’s uneven production of Moliere’s The Miser, one in which high comedy style at times verges on desperation.

In Ranjit Bolt’s new version of the 1668 comedy, the miser Harpagon becomes despicable Canadian skinflint and usurer Harper (Colm Feore), a man who never met a dollar he didn’t want to keep forever.

His daughter Eleanor (Alexandra Lainfiesta) and son Charlie (Qasim Khan) are both in love — she with Harper’s butler Victor (Jamie Mac) and he with Marianne (Beck Lloyd), a comely neighbor who selflessly attends to her impoverished widowed mother. These are not matches of which their father would approve and, since he exercises total control of their trust funds, they live in mortal fear that he will cut them off without a penny. To further complicate matters, 70-year-old Harper, who has apparently never displayed lust for anything but money, decides he will marry Marianne with the help of matchmaker Fay (Lucy Peacock).

The action of The Miser unravels these twisted threads through various machinations by the young lovers and a series of improbable — and very funny —coincidences that make the plots of Twelfth Night and Comedy of Errors look like child’s play.

This kind of material demands a form of heightened realism in which characterizations are exaggerated while, it is to be hoped, still retaining a measure of reality. It’s difficult to empathize with characters who cease being people and become cartoons. Director Antoni Cimolino has chosen to push the envelope in this regard, with varying degrees of success.

Of course, if you encourage actors to chew the scenery it helps to have Colm Feore leading the way. His Harper is a masterpiece of comic exaggeration and for most of the play he has the audience eating out of his metaphorical hand. Not everyone in The Miser can pull this off with the same skill. The younger generation in particular tends to tumble into hammy overkill.

One who avoids this trap is Jamie Mac in the role of Victor. He manages to be big without being grotesque. Because he always manages to remain utterly believable he is the only one of the kids for whom I had total sympathy. Since director Cimolino deprived him of a chance to dazzle as Richmond in this season’s Richard III, thanks to an anti-heroic ending totally at odds with Shakespeare’s intent, I was pleased to see this fine actor have an opportunity to shine. His was the most centered performance in the ensemble.

Another actor who manages to thread the stylistic needle is Lucy Peacock as Fay. Her on-her-knees desperation to coax a loan out of Harper was a highlight. Festival veteran Ron Kennell also scored as Jack, Harper’s man of all trades, who uses his malleable headgear to signal his shifting roles in the household.

The comedy of The Miser has been aided and abetted by a number of directorial touches. Bolt’s veddy British version has been sprinkled with sly Canadian references that generated regular laughter but no doubt eluded most Americans, myself included. On the other hand, when Harper says he doesn’t trust safes because “they’re an invitation to burglars . . . and the FBI” everyone got the joke.

When Harper’s buried treasure disappears and he is searching for the culprit, the house lights go up and, as he surveys the audience, he gasps “Who are all these people?” Of course we are all suspects and when we laugh he wails in self-pity “Now they’re laughing at me!”

Other attempts at humor don’t pay off. Wasn’t it Chekhov who said if you take a dick pic in the first act you should do something with it in the second act? Something like that.

Designer Julie Fox’s set, handsome as it is, was the most cluttered of any I’ve seen on the Festival stage since the days of Des McAnuff. For a man who never parts with a nickel unless he’s forced to, Harper seems to have accumulated an awful lot of stuff.

I found the costumes, also by Fox, a mixed bag. Harper’s heliotrope go-a-courting outfit was marvelously funny and Lucy Peacock looked positively ravishing in skin tight black pants and metallic high heels. But Charlie’s flamboyant outfits belied his insistence that the last item of clothing he had purchased was a pair of sneakers at Value Village. Marianne’s dress seemed to have been stitched together from a corset and drapery remnants, perhaps to indicate her penury. But a sexy outfit like that would cost a pretty penny in a millennial boutique.

The Miser ends on a rousing note, with a wonderfully celebratory dance sequence that I at first thought was the curtain call. Adrienne Gould is credited as choreographer. Lighting by Lorenzo Savoini and music by Steven Page added to the fun. This was followed by an almost poignant coda in which a solitary Harper, in near darkness, communes with his restored wealth. It was as if the director was unsure in which direction he wanted to go.

As welcome as these continued revivals of Moliere are, compared to 2017’s Tartuffe and 2016’s Hypochondriac, The Miser comes in third.