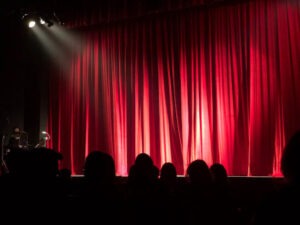 Jesse Green’s recent article in the New York Times about ending racism in theatre kicks off with a discussion of changes at New Haven’s Long Wharf Theatre  If you are not up to speed on Long Wharf’s current situation, Green’s article will fill you in. More information can be found here.

I attended university in New Haven, have lived for the past 20-some years in its shadow, and have patronized Long Wharf, on and off, since the seventies, so allow me to weigh in.

If Long Wharf truly wants to enter into and reflect the lived reality of the New Haven community, Artistic Director Jacob G. Padrón and others on his staff would be well advised to travel to tiny Blyth (pop. 1,000), Ontario, and ask Artistic Director Gil Garrett how the Blyth Festival works its particular magic.

Founded with a mandate to present new Canadian plays on rural themes — a notion that at first blush struck me as something of a joke — Blyth has been doing precisely that for 47 years, and doing it with great success and remarkably high artistic standards. Its productions have also, not so incidentally, touched on many of the racial, cultural, and ethnic themes that have been roiling theatre communities across the United States.

In recent years Blyth has presented plays about farm life, murders in local nursing homes, small town cake competitions, black cowboys in rural Alberta, gay-run B&Bs, conflicts between indigenous people and white owners of vacation homes, and colorful incidents in local history. (A play about Filipina immigrant nurses this season was cancelled due to Covid.) They even produced a play, created collaboratively by the company, about the rowdy history of the bar across the street from the theatre. Theatre doesn’t get more local than that.

In his article, Green mentions how, when seeing a Black play in Atlanta with an overwhelmingly Black audience, he “recognized the pleasure a shared understanding between actors and audience can engender.” As a native Manhattenite who always thought a hoe was a racist term of opprobrium, I experience something similar at Blyth.

Long Wharf has declared its intention to leave its predominantly white, elitist past behind and become an “itinerant theatre company” presenting work in various rented and improvised venues across New Haven as part of a “community-oriented model”.

Unfortunately, Long Wharf still seems to cling to its elitist mindset, one in which a privileged and highly-educated administration (Padrón graduated from the prestigious Yale School of Drama) imbued with the latest notions emanating from our elite universities presumes to feed the audience the art it feels they should consume.

A case in point is Long Wharf’s online, one-night-only presentation of Black Trans Women at the Center, featuring a series of short plays that “center” Black trans women and that “underscores LWT’s commitment to prioritizing Black trans women as storytellers and theatremakers.” A laudable goal, no doubt.

But consider this: The trans population of Connecticut is 0.34%. On the other hand, 25 Black people were murdered in New Haven in 2021. A Black woman was shot by police in the shadow of Yale University in 2019. Black poverty in New Haven approaches 40%. I wonder where the concerns of New Haven’s Black community are really “centered.”

If Long Wharf really wants to create programming that reflects the rich and diverse history of New Haven, there is much to choose from. The slaves who revolted on the Amistad were incarcerated in New Haven. The “urban renewal” of the sixties effectively ghettoized the predominantly Black Hill neighborhood and in 1967 police harassment hounded the Hill Parents Association into oblivion. In 1970, the trial of Black Panther Bobby Seale brought turmoil to the streets of the Elm City.

Want to take on white privilege? Look no further than Yale, which has a long history of tension with the city of New Haven. In 2016, a Black employee at Yale’s Calhoun College (now Hopper College) broke a stained glass window depicting slaves. Yale employees and graduate students have long struggled to unionize. And what about the time in 1824 when Yale medical students stole Tabitha Smith’s body?

Women’s issues? In 2019, Yale celebrated 50 years of women at Yale College (women had been admitted to its graduate schools for some time). Has anyone written a play about Alice Rufie Jordan Blake, who received a law degree from Yale – in 1886? Or Yale’s own #MeToo sex scandal, one that had an interesting twist?

And if Blyth can do a play about the bar across the street, what is to prevent Long Wharf from doing a play about Pepe’s, Sally’s, and Modern? (That’s apizza for those who don’t know.)

There are plenty of other topics I could mention, but enough. I think I’ve made a case that New Haven offers an abundance of material for playwrights to draw on. They just need a nudge, and the last time I looked playwrights, bless their hearts, were willing to write for the merest hope of a production. I might also mention that the Yale School of Drama (you’ll never get me to say G****n) has a playwrighting department.

I wish Long Wharf good luck and godspeed in its new era. But first, Mr. Padrón, hie thee to Blyth! You can find it on Google maps.