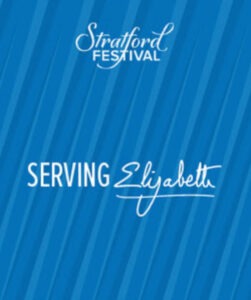 Serving Elizabeth, a wonderful new play by Marcia Johnson, travels in time from Kenya in 1972 to London in 2015 with five terrific actors playing all the roles.

The conceit of Serving Elizabeth – and this is all entirely fictional – is that Mercy, an outspokenly anti-British Kenyan cook and her daughter, Faith, have been hired by a functionary of the royal household, Talbot, to prepare and serve meals to Princess Elizabeth at Sagana Lodge during her 1952 visit to Kenya. Elizabeth was standing in for her father, King George VI, who was in declining health and who died during her visit making her queen.

In 2015 London, Tia, an unpaid Kenyan-Canadian intern is working on a television production that looks suspiciously like The Crown, which is not surprising since it was that show’s episode about Elizabeth’s visit to Kenya that inspired Johnson to write Serving Elizabeth.

Both Tia and her boss, production manager Robin, have aspirations to be screenwriters and both are concerned with “representation,” Tia of black Africans and Robin of lesbians. Tia’s attempt at a “commercial” script is dreadful and Robin urges her to write something she’s passionate about.

Tia is appalled that Kenyans are conspicuously absent from the episode about the royal visit to Kenya and that the few who do appear are depicted as subservient to their white overlords. Her concerns drive her to make an unauthorized visit to the home of Maurice, the highly successful writer of the series, where she confronts him with these lapses. He doesn’t take it well.

According to Serving Elizabeth, Mercy takes advantage of her proximity to Elizabeth to poison her, but relents at the last minute after a conversation in which Mercy gives vent to her feelings and Elizabeth responds with empathy and understanding.

In the closing moments of Serving Elizabeth we realize that Tia has finally written that script that channels her passions and it’s the play we are seeing.

It would be easy to poke holes in Johnson’s reimagining of history. The notion that a known anti-British activist would be hired to cook for Elizabeth and that this person would then find herself alone with the princess is patently absurd. And complaining about the lack of African representation in a show about the royal family is a bit like me complaining about the lack of Irish representation in an August Wilson play.

This sort of criticism is beside the point. What Johnson does in Serving Elizabeth is to “foreground” (hideous word) her concerns about the way mainstream (i.e. white) media consistently ignores wide swaths of humanity and when it deigns to take notice of them depicts them through a distorting lens. That’s a fair point and I certainly will not begrudge Johnson’s thought experiment here.

Of course, Johnson might well have written an angry screed of a play, with cardboard villains and noble heroines. What she has produced instead is a well plotted and engaging story filled with rounded characters who spring vibrantly to life and earn our sympathy, flaws and all.

What’s more, under the brisk direction of Kimberley Rampersad, these characters are brought to life by a terrific cast who clearly delineate their multiple roles. Festival veteran Sean Arbuckle is bang on the money as both the fussy Talbot and the mercurial Maurice. Sara Topham, who has been absent from Festival stages for far too long, makes a persuasive 24-year-old Princess Elizabeth and is equally at ease as 2015’s Robin.

As Faith and Tia, Virgilia Griffith is a delight in both 1952 and 2015. Johnson has given her a budding love interest in both eras and Cameron Grant fills both parts very nicely indeed. It is to Johnson’s and Rampersad’s credit that what might have been a throwaway cliche is so richly fleshed out. I couldn’t help imaging these two attractive performers as Hamlet and Bertram in the Festival’s 2022 season.

Best of all is Arlene Duncan who makes Mercy a powerful woman and a figure to be reckoned with. She has less to do as a 2015 casting director but handles that assignment with aplomb nonetheless.

I was also pleased to note that the Kenyan accents in Serving Elizabeth were perfectly understandable, in sharp contrast to the impenetrable Nigerian accents deployed in 2022’s Death and the King’s Horseman.

Alas, Serving Elizabeth is no longer available on [email protected]